Stroll the galleries of the Clyfford Still Museum while you enjoy beautiful music performed by this string duo!

Enjoy live music as you wander the Clyfford Still Museum galleries with performances by cellists Ernie Carbajal and Dylan Tyree at 11 a.m. and 1 p.m.  These musicians represent the next generation of chamber music artists, both accomplished musicians at the Lamont School of Music.

Two identical concerts will be performed at 11 a.m. and 1 p.m. (a break will occur from 12–1 p.m.)  Performances are included with museum admission.  For tickets purchased online, FCM patrons receive $2 off adult and senior tickets with code MUSIC.  Seating is limited and first come, first served. The music may be enjoyed from any gallery.

Presented in partnership with the Clyfford Still Museum. 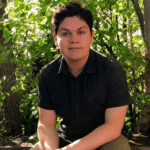 23-year-old cellist Ernie Wolfgang Carbajal began playing the cello at five years old. He is pursuing a master’s degree at Denver University’s Lamont School of Music where he is a teaching  assistant under Professor Matthew Zalkind. In 2019 he received recognition from the city of Los Angeles for a performance of Georges Boulane’s Symphonie Concertante with Dale Breidenthal and the Afro American Chamber Music Society Orchestra.  He is also the recipient of a Carl Becker cello (1914), on loan from the Colburn Instrument Collection.  Carbajal’s non-musical interests include writing, walking, and keeping reptiles and aquatic pets. 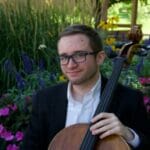 As a cellist, Dylan Tyree regularly enjoys playing chamber music, recital repertoire, rock concerts, symphonic music, and everything in between. Most recently, Dylan premiered Eric Whitacre’s The Sacred Veil for cello soloist, string orchestra, and mixed choir at the Newman Center for the Performing Arts with Eric Whitacre conducting.

Active as a composer/arranger, Dylan has received top prizes in various competitions including the 2021 ASCAP Foundation Morton Gould Young Composer Awards.  Dylan was awarded the “Outstanding Student in Composition” award from the Lamont School of Music in 2022.